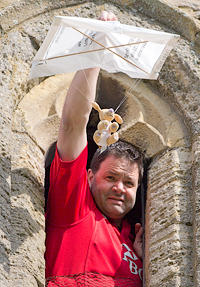 The Spaldwick Fayre, held on the afternoon of Saturday 14th April 2012 was a great success, with a range of activities offered.

Parachuting teddy bears from the Church proved a big hit! Organiser Amba Harbour said, “Wow! What a fantastic afternoon. There were lots of visitors and supporters to the event.”

Amba said, “Spaldwick has just proved that there is talent from poets to cross stitch experts. Our four fantastic judges had a hard time deliberating on how to award points. There were 70 certificates awarded for first, second and third places overall in  each class and age category.” 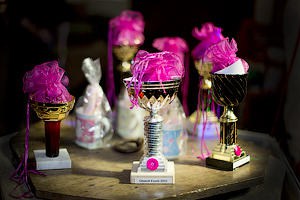 Trophies for high point scores (for entering many categories and gaining most points for entries overall) were awarded to Emily Wakefield (under 5), Lorcan Harbour and Alice Rutherford (age 6-10), Aine Harbour and Teigan Harbour (age 11-15) and Carolyn Traynor (age 16+). The Bee Crafty Voucher was given to the highest point scorer in the craft section and this was awarded to Margaret Plummer.

The standard overall was high but open to challenge, so we look forward to another event next year. Please get your thinking caps on to decide what you would like to enter for next year! 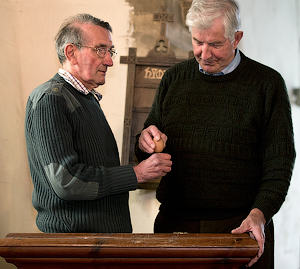 A very popular activity proved to be ‘Egg Jarping’,  which is a competitive sport similar to conkers but using hard-boiled eggs!

The winner of the Egg Jarping contest was John Blatch (left).

The Spaldwick Easter Fayre was held in aid of replacing the stolen lead from the Spaldwick Church roof.

Amba and everyone associated with Spaldwick Church would like to thank everyone for their support.