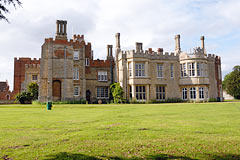 Inspectors have criticised the performance of the school in science where “too few student gain the top GCSE grades A* to B that they are capable of because they do not make sufficient progress in the science subjects”.

The inspection report also states, “Although sixth form students are of above average ability, the proportion of A* to B grades awarded at A level has declined over recent years and remains below the national average. In 2013, students made significantly less progress than expected in biology, chemistry and pyschology.”

Given its rating, the school can expect another Ofsted inspection within two years. Principal Andrew Goulding has said that his senior team and staff will work “tirelessly” over the coming months to be able to present a “more consistent picture” for the next inspection.