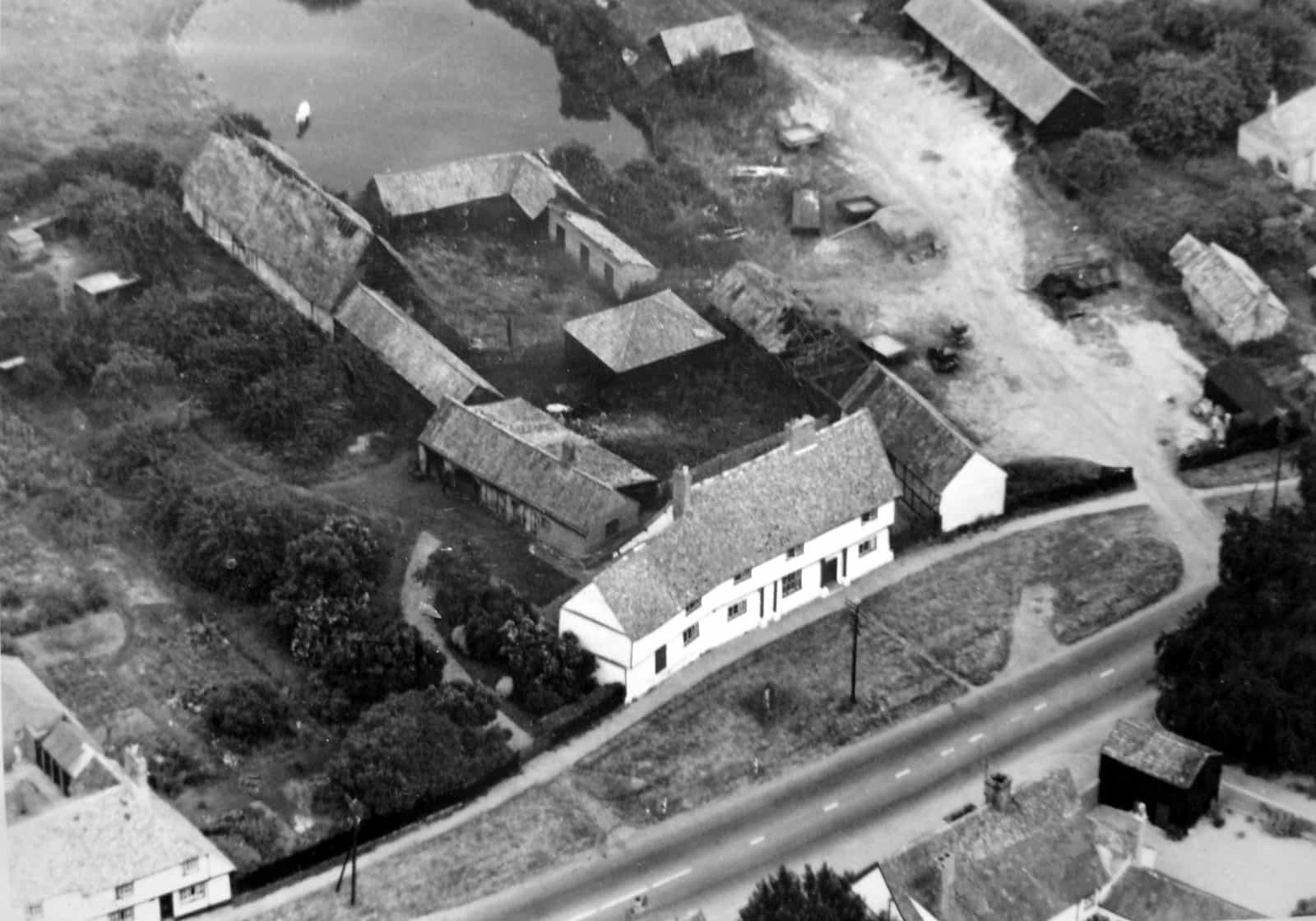 Manor Farmhouse is a grade II listed building on the High Street of Spaldwick. Manor Farm was recently purchased by Richard Johnson, who is now in the process of renovating the site. As can be seen on the old aerial photo below, Manor Farm encompasses both the Farmhouse and extensive outbuildings. The timber frame and pan-tiled roof barns became obsolete for farming purposes, meaning that they had not been repaired or maintained and had been left to deteriorate, with some structures collapsing. The Farmhouse and the barns are on the ‘at risk’ register.

Thanks to Richard Johnson, we are pleased to provide high-resolution external photos taken by Mark Heath, which show the current condition of the Farmhouse and outbuildings. You can view the external photos by clicking on the following link:

We will shortly be publishing internal photographs! We are delighted that Richard Johnson has agreed to provide a diary of the restoration project here on the Spaldwick website. Richard founded his company – Richard Johnson Restorations – in 1992, which has now undertaken restoration and repair of over 30 listed properties, primarily within East Anglia.Here is Richard’s first diary entry.

“It seems to me that I owe the village of Spaldwick an explanation of what has happened since I took over as the latest custodian of Manor Farmhouse.”

“I completed the purchase of the property on Friday 26th September. I put up my signs the following day. My team and I turned up to start work on the following Monday!”

“The first part of my time at the project was devoted to investigating the strength of the building, particularly as the structure of the building is unconventional because of the protruding first floor. This is referred to as a jettied storey.”

“The first task was to investigate the condition of the timbers supporting the building, by making small holes in the plasterwork in several areas.”

“As in every building, the weight of the roof is carried by the upper wall. This wall is supported, not by the lower wall directly (as in normal houses), but by the timbers that protrude beneath. These timbers have three jobs to do. They support the wall and roof above. They form the floor/ceiling joists of the internal structure and they tie the two sides of the house together.”

“Understanding the condition of these jetty timbers was, therefore, imperative. If these timbers were weakened, by for instance wet/dry rot, woodworm/beetle infestation or even historic fire damage (as looked possible from my initial small plaster holes), then I needed to be aware immediately.”

Roof and upper wall held up by plaster! “Villagers will be well aware of the strange bulges in certain areas of the front wall. It was my investigation of these during the first few days that really set alarm bells ringing!”

“The front bottom window had a huge bulge at its top left corner. I carefully investigated this and found, to my surprise, that the structural timber behind the plaster bulge was intact and perfectly straight. There is only one reason why this would occur. The whole load of the roof and upper wall structure was being held up by the plaster layer on the outside of the house!”

“Before anything else was done, the upper wall structure needed to be urgently supported directly from the ground on Acrow props. This is why the 16 props appeared so early in the project.”

“Having supported the upper part of the front wall and roof, I set about exposing the timberwork and sole plates as can now be seen. In essence, the only function of the lower wall at this point was to support itself. It was no longer being relied upon to support anything above.”

“No one in the village will be unaware of the condition of the lower part of the front wall. As is quite common with timber framed buildings, the bottom horizontal timber (sole plate) has been largely eroded. As is usual, the process of decay is not uniform. Some areas of the lower wall are sitting on good solid timber while other areas are sitting on a damp powder!”

In the photo below, you can see the tunnel along the length of the wood carved by vermin, with a convenient entry hole into the building! Plaster was a health and safety issue

“Installation of the Acrow props required the removal of the brown painted timber at the bottom of the jettied upper wall. It rapidly became evident that the plaster on the upper wall was seriously unstable, causing an urgent health and safety issue. As much as two-thirds of the plaster/render layer was in danger of falling off the wall. I had to think of not only the safety of the people working for me but also the public at large, so I took the step of removing some of the plaster.”

“Of the remaining third, the majority was firmly-fixed concrete, which had been applied over the last 30 years. While this was not going to fall off, it was made up of the worst possible material, which can seriously damage the oak timbers.” Thank you Richard. We look forward to your next update on progress.

To be alerted to updates via email, please register using your email address. Updates will also be posted on the Spaldwick Facebook page, administered by Darrell Haylett.

To view all the latest photographs for the project,  click on the following link:

View the external photos of Manor Farm in Spaldwick